The Province with a population of approximately 500,000 is divided into nine districts Bulolo, Finschhafen, Huon, Kabwum, Lae, Markham, Menyamya, Nawaeb, Tewae/Siassi and; 230 distinct languages are spoken.

The province shares common boarders with Madang, Eastern Highlands, Gulf, West New Britain, Central and Oro Provinces. Lae is the center of PNG and is the provincial capital and the second largest city in the country. It is situated at the mouth of Markham River and the start of the Highlands Highway. The Markham river valley runs through the center of the province. The province is characterized by rough terrain to gentle slopes and flat plains. The main mountain chain includes the Huon Peninsula, Sarawaged with the highest point (at 4,425 m above sea level) the Rowlinson range to the north and the Owen Stanley Range to the South. 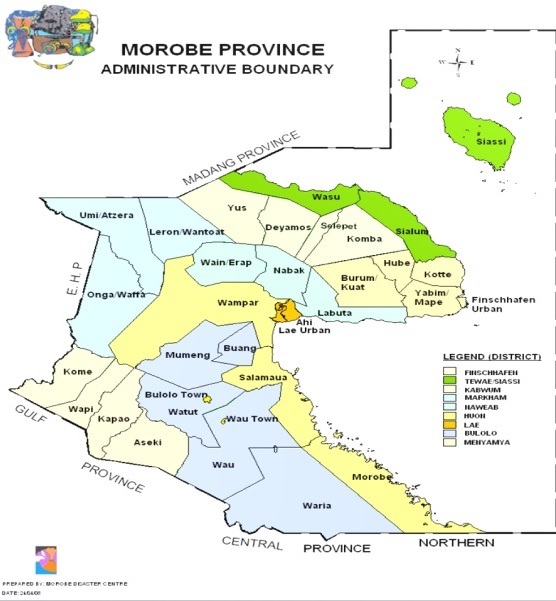 The major river system includes the Markham and the Waria rivers, which are two of the ten fastest flowing rivers in the country. The other notable rivers that have potential for hydroelectric scheme development are the Watut, Mongi, Masaweng, Paiawo, Maiama and Franscisco rivers. The climate is and extremely humid as a result of high mountains and deep valleys. More than 5,080 mm of rainfall is recorded annually in Lae. The provincial map above shows main centres of the 9 major districts in the Morobe Province.